Epidemiological situation of HPAI viruses from clade 2.3.4.4 in Europe as of 3rd May 2018

Since the last situation report on 26th March 2018, the highly pathogenic avian influenza (HPAI) virus of subtype H5N6 has been reported for the first time in Slovakia on 28th March in wild birds (the virus was detected in a black-headed gull (Chroicocephalus ridibundus) among five birds found dead), and in Finland with two cases reported on 3rd and 24th April in white-tailed eagles (Haliaeetus albicilla).

The H5N6 virus was also identified in wild birds in other countries:

The H5N6 virus has also been notified in captive wild birds with a case reported in Sweden on 9th April in a non-commercial holding of 105 birds (species not mentioned).

The H5N8 virus continues to circulate in poultry farms:

Bulgaria has also reported four outbreaks of H5Nx in duck farms on 5th and 25th April.

From 1st October 2017 to 3rd May 2018 (included), a total of 145 outbreaks of HPAI H5 (including 60 outbreaks of H5N8) were notified in twelve European countries: Bulgaria, Cyprus, Denmark, Germany, Ireland, Italy, the Netherlands, Sweden, Switzerland, the United-Kingdom, Finland and Slovakia (Table 1, Figures 1&2). Two serotypes were identified: H5N6 (Figure 1) and H5N8 (Figure 2). 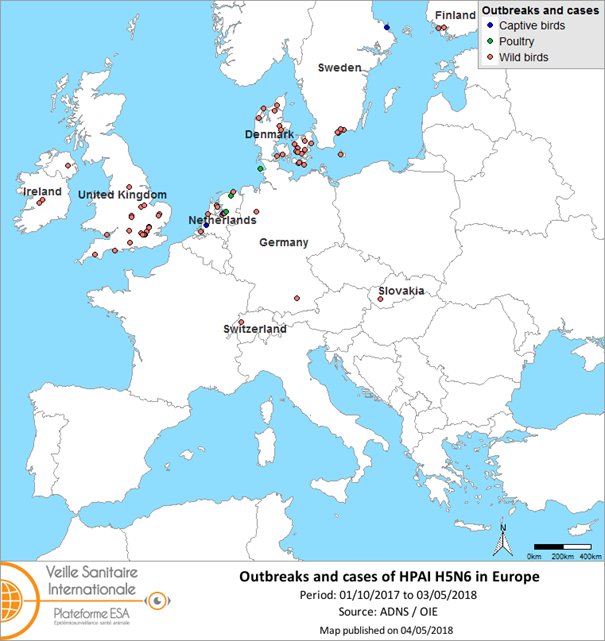 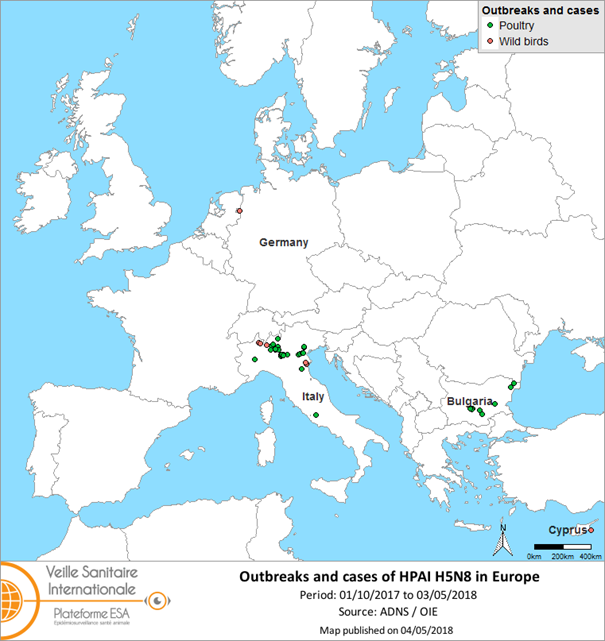 Table 1: Number of outbreaks in domestic, wild and captive birds notified in Europe from 1st October 2017 to 3rd May 2018 by country and subtype of virus (source: ADNS/OIE)

Table 2: List of wild bird species affected by HPAI in Europe from 1st October 2017 to 3rd May 2018 included (source: ADNS) (in yellow: new species/locations since the last update) 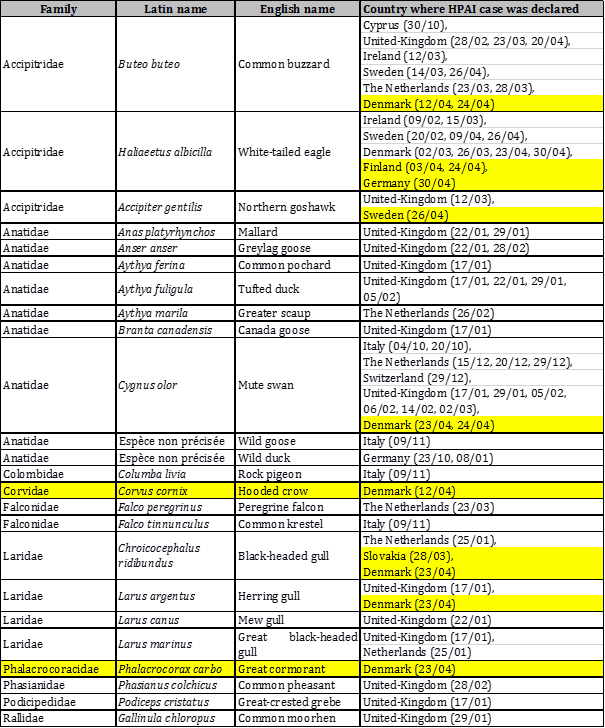 Many wild birds recently infected by IAHP H5 viruses are birds of prey, including the common buzzards (Buteo buteo). The majority of these buzzards are probably residents, which could indicate a diffuse infection from smaller birds which the buzzards prey on, an infection that could go unnoticed due to the small size of these preys (e.g. sparrows).

The rock pigeon belongs to the Columbidae family, which is in general though to be less susceptible to avian influenza strains. The only cases of HPAI H5N8 detected in Columbidae in the world were located in the South-West of France (two common wood pigeons and five turtledoves), in direct link with the affected farms, with the hypothesis of a particularly high viral load developed in the affected poultry farms. This hypothesis is also valid for Italy. The list of wild species at risk in Europe has been published in the EFSA journal (Scientific opinion, adopté le 14 Septembre 2017, doi: 10.2903/j.efsa.2017.4991)
Wild birds are now nesting (reproduction period) which limits their movements.

An H5N2 virus detected in Russia
On 29th December 2017, Russia reported an outbreak of HPAI H5N2 in a poultry farm of more than 660 000 birds, in the region of Kostroma in the Northeast of Moscow (OIE report 29/12/2017). This outbreak was initially notified as H5N8 three days prior.

This is the first report of HPAI H5N2 virus in Russia and the last outbreak of HPAI H5N2 reported in Europe dates back to January 2016 in France.

Regarding the origin of this virus, two hypotheses can be formulated: