Epidemiological situation of HPAI viruses from clade 2.3.4.4 in Europe as of 6th March 2018

Since the last situation report on 21st February 2018, the highly pathogenic avian influenza (HPAI) virus of subtype H5N6 has been identified for the first time in Denmark in a white-tailed eagle (Haliaeetus albicilla) found dead on 13th February in a forest near Slagelse (ADNS notification 2nd March 2018). The United-Kingdom has notified six new cases of H5N6 in wild birds, and the Netherlands has reported a new case of H5N6 in a greater scaup (Aythya Marila) found dead on 20th February and a new outbreak in a poultry farm (species not mentioned) on 28th February.

From 1st October 2017 to 6th March 2018 (included), a total of 89 outbreaks of HPAI H5 (including 52 outbreaks of H5N8) were notified in ten European countries: Bulgaria, Cyprus, Denmark, Germany, Ireland, Italy, the Netherlands, Sweden, Switzerland, and the United-Kingdom (Table 1, Figure 1). Two serotypes were identified: H5N8 and H5N6. 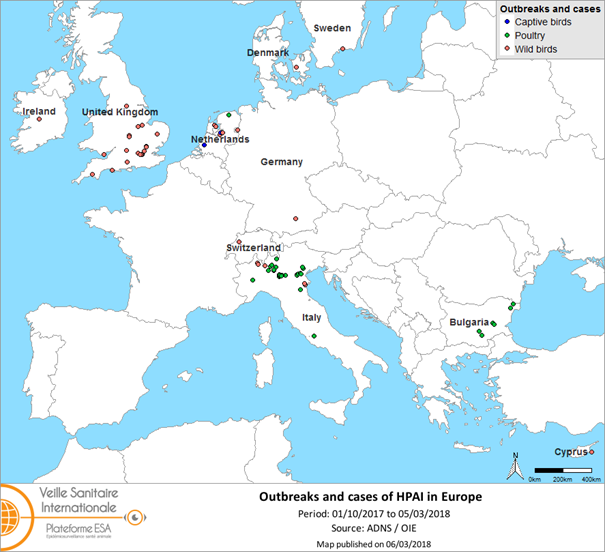 Table 1: Number of outbreaks of HPAI in domestic, wild and captive birds notified in Europe from 1st October 2017 to 6th March 2018 by serotype and type of species (source: ADNS/OIE) 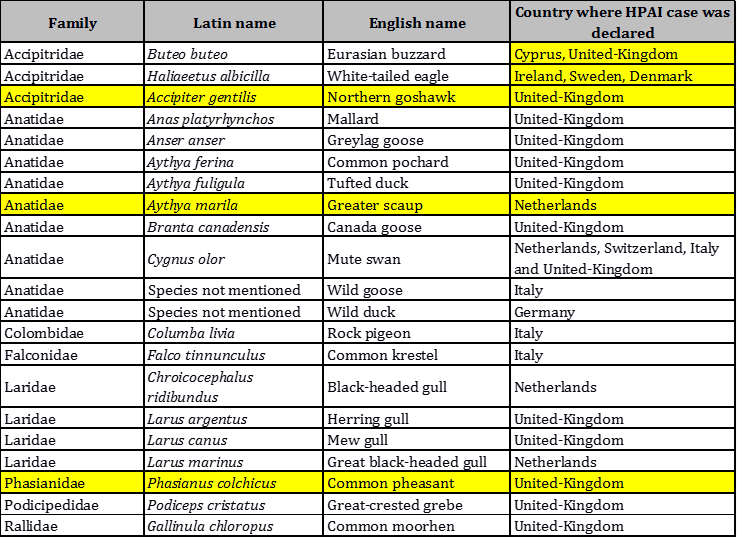 The rock pigeon belongs to the Columbidae family, which is in general though to be less susceptible to avian influenza strains. The only cases of HPAI H5N8 detected in Columbidae in the world were located in the South-West of France (two common wood pigeons and five turtledoves), in direct link with the affected farms, with the hypothesis of a particularly high viral load developed in the affected poultry farms. This hypothesis is also valid for Italy. The list of wild species at risk in Europe has been published in the EFSA journal (Scientific opinion, adopté le 14 Septembre 2017, doi: 10.2903/j.efsa.2017.4991).
North-South migrations ended several months ago. South-North migrations have now started.

A H5N2 virus detected in Russia

On 29th December 2017, Russia reported an outbreak of HPAI H5N2 in a poultry farm of more than 660 000 birds, in the region of Kostroma in the Northeast of Moscow (OIE report 29/12/2017). This outbreak was initially notified as H5N8 three days prior.

This is the first report of HPAI H5N2 virus in Russia and the last outbreak of HPAI H5N2 reported in Europe dates back to January 2017 with three outbreaks reported in poultry farms in France.
Regarding the origin of this virus, two hypotheses can be formulated: